My 6½ weeks volunteering in Moshi, Tanzania

My idea of volunteering  abroad arose a few days before New Year’s Eve, when I was listing up my resolutions. One of them was to make the most of my long long summer holidays. So, when I went back to uni in January, the first thing I did, was: I booked a consultation hour at AIESEC.

Mariana, my EP Manager, showed me all kinds of volunteering opportunities AIESEC was offering, and I was so overwhelmed that I had a hard time choosing one: First I was going to apply for a solar panel project in Egypt, then I read about an artistic education project in Brazil, but eventually I went for this women empowerment program in Tanzania, and that was probably the best decision I ever took.

The preparation for my volunteering project didn’t take too much time: I attended one preparation seminar and bought everything I needed within a day… and to get my visa, I only had to fill in some form when I arrived at the local airport. 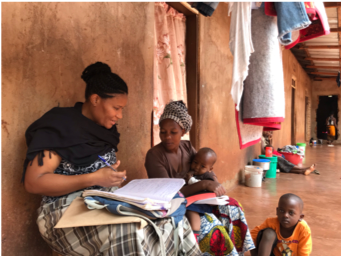 [Home visits] Visiting the mamas’ homes was probably my favourite part as you get to know their life stories and their living circumstances. 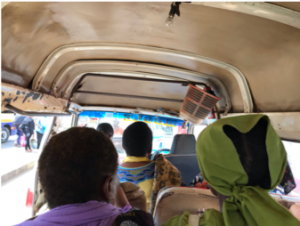 [Dala dala rides] Dala dala chauffeurs don’t really care about timetables. Much more, they care that they’re vans (that are designed for seven people) are packed with at least 25 passengers.

So what was my volunteering project about?

The purpose of the project was to empower the women who take part in all kinds of activities at the organization’s community centre. While most of them devote their time to their newly born babies, the mothers with slightly older children started their small businesses, and my role was to advise them on how to make their ends meet without having to rely on their husbands – but I ended up doing much more than that: 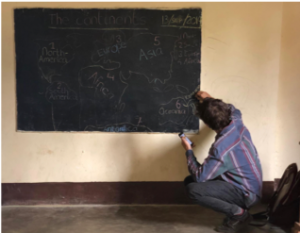 [Teechah Ben] …and that’s me teaching Geography. (Note: This picture wasn’t taken at my community centre but at an orphanage my housemates Jas and Beau where working at.

On workdays, I was for example…

This might sound like a lot of work, but to be honest, I’ve had quite a bit of free time… during which I was chatting for hours and hours with my awesome co-workers, and I’ve also spent quite a bit of time playing the guitar in the community church.

And all in all, I believe that I was able to contribute something to the centre, but I’m sure I’ve learned much more from them than they had learned from me. 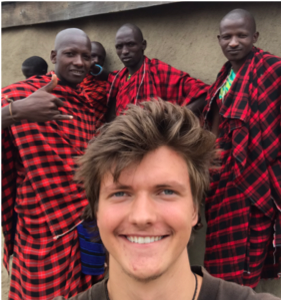 My Maasai gang and me

What else did I do?

I travelled, a lot. I was lucky enough to live with amazing local AIESECers, who took us to the region’s most beautiful places. 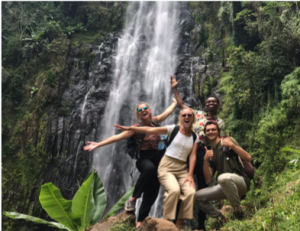 Jas, Bo, Anderson and me (at the Materuni waterfall)

Robbie took me to his grandma’s place on a marvellous hill covered by tall banana trees. And Anderson took us to the beautiful Materuni waterfall. One week my sister came over with whom I went for a three-day safari tour. I was also lucky because my other two housemates (two fellow volunteers from the Netherlands) liked the idea of seizing every opportunity to travel too.

Travelling is, by the way, an ideal way to escape the chaotic crossroads in the city on Sundays. However, don’t travel every Sunday because you gotta go to church at least once. It’s a gospel church so masses are far from boring! 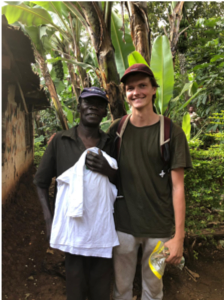 Finally, my stay in Tanzania wouldn’t have been nearly as great if the local AIESECers hadn’t been such an awesome bunch of people. You should see them dancing: When I stood next to them on the dancefloor, I was ashamed to death because they’ve got so much more rhythm in their legs than I do.

…and if you’re thinking about applying for this program, don’t hesitate to contact me at hibenji@mail.com