All you need is love

After my 10-hour flight from Lisbon to Brasilia, a clumsy request for a subway sandwich in the little Portuguese I learned 5 minutes earlier, and another 2-hour flight later, I finally arrived at my destination: Florianopolis. An island, ultimately bigger than I expected, but miniscule when compared to the whole of Brazil. Eventually a local friend would tell me, that Brazil, as the fifth-largest country in the world, has so many people with different language backgrounds, cultures and customs that he felt as if he was a foreigner when travelling from one state to another. 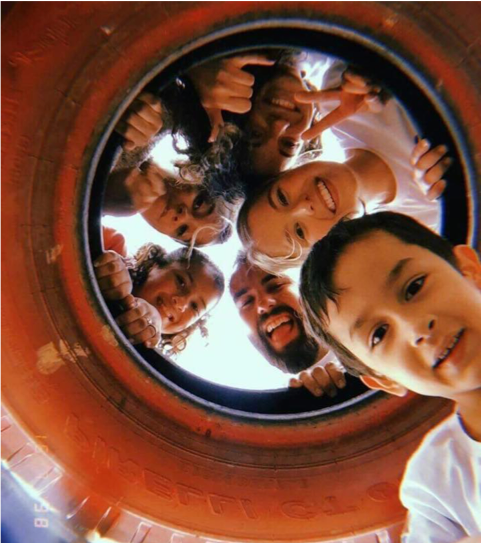 But let’s go back to the July night, the night of my arrival. Even though there have been initial communication issues, at last around midnight I could let myself fall into the backseat of a girl’s car who was working for AIESEC. Her friend was warmly smiling at me, unfortunately though, after I asked her with the Portuguese I learned, if she spoke English, she shook her head.

Over the course of my stay, I learned to love and study the language, but for now all I could do was to give her a kind smile back and lean back into my seat. The first few days were an emotional rollercoaster, as I already joined on Day one my first Brazilian festival (yes, it was amazing), but somebody unfortunately got a hand of my purse. Thus, as my phone was in there, early on my communicative abilities were rather restricted. In any way, I could comfort myself with the thought of having learned early on to keep an eye on my stuff.

The workplace and tasks

From the AIESEC website’s description I could not gain much information on what I would ultimately do, other than that it had to do with marketing. So, before arriving at my workplace I tried not to form too high expectations. How much the work would eventually exceed my expectations, I could not remotely have imagined.

The property of the childcare centre was in the middle of a favela but compared to its surroundings it was beautifully constructed. It had a playground, a gym and a building with classes and reading rooms, a common room to play games and gather around, and a cafeteria. The stage in the common room was perfect for children to show their talents from Judo, to traditional Brazilian dancing, singing or playing instruments. My favourite place became to be the garden where teachers would often take children to water the banana trees, the lettuce or the basil bed.

Most of the teachers were going on vacation for the next few weeks, so our team’s task – we were about 12 volunteers – was to organise activities and games for the approximately 100 children between 5 and 17 years old in the centre. Moreover, I had the task with another volunteer to take pictures and videos of the kids to create marketing content to post on their social media.

At the end of the day, I would lie if I would say it was not exhausting at times to juggle from playing with the children to calming them down when upset – in Portuguese -, to trying to silence them when somebody was explaining a task. All while taking pictures and videos. Nevertheless, I was amazed by how much the children would burst with energy, enthusiasm and creativity, and the impact that had on me personally. Running around with the children, playing hide-and-seek or simply teaching them how to make a handstand brought so much joy and beautiful smiles on their faces, that it was worth the occasional aching muscles in the evening.

My experience in Brazil included plenty of unforgettable, warm and heartfelt moments that it is pretty much impossible to put it into so little words. From climbing stone walls and jungles at Lagoinha do Leste or visiting the Iguaçu Waterfalls (275 to be specific) in Argentina, to dancing all night Samba in my neighbourhood Sambaqui. But there are indeed a few days which have shaped me most significantly.

Towards the end of my stay in Brazil the manager of the childcare centre invited us to her home to celebrate the successful weeks with self-made cocktails (Caipirinha with cachaça in Brazil is a must), and traditional Brazilian food. Memories and hugs have been shared, songs were sung in various languages, and tears of joy and love ran throughout the evening. Since three other volunteers and I decided to take the next morning’s 6am flight to Rio de Janeiro, it probably would have been smart to go home after that, to get a few hours of sleep and then drive to the airport. To cut things short caipirinhas can make you happier, but not necessarily smarter. Instead, we joined one of the local teachers, to continue the party at his house.

But, to my own surprise, last minute we managed to get to the airport. As we landed in Rio and took a cab into the centre – a little sleep-deprived I will admit – I was completely in awe how stone walls, and huge buildings with colourful graffiti art combined with mountain chains and tropical flora in every single corner of the city build such a beautiful whole. Rio was, of course, an adventure on its own, and next to the obvious tourist attractions (Christo Redentor, Pão de Açúcar, Copacabana etc.) what I can recommend is to visit the botanic garden.

But what surprised me most, was how much I missed the group and sharing jokes and laughs with each and every one of them. So, it was no surprise that as soon as we landed back in Florianopolis we took the next cab to drive to our favourite bar and meet the others and greeted them with warm hugs and beaming smiles.

…this volunteering experience created altogether a really warm and loving place in my heart for Brazil and its people. I have learned what should be at the core of my existence (health, relationships and learning) and how I want to contribute to a better future for not only my potential children but the children of the world. Doubtlessly, there have also been challenging moments, which lead me to struggle and re-think where I stand and what person I want to be. But altogether, this experience has done an amazing job in guiding me in the right direction.

This post was written by Ann-Caroline Wever. Carolin went on a voluntary project powered by AIESEC in the Netherlands. We offer international voluntary projects and professional internships with the aim of developing leadership in youth.